IT’S ALL ABOUT THAT INFLATION

June marks the end of Q2/H1 of 2022. Yet the twin headwinds of inflation and a global growth slowdown leading possibly to a recession remains.

From the demand side, the Federal Reserve seem to be slowly but surely taming the demand side with hefty rate hikes. “US inflation”, one principal said. “is likely close to peaking. Consumers are shifting from goods to services, while overall demand is also slowing, so core goods price pressures are becoming more deflationary”. But this inflation we are all faced with, is not just from demand but equally, if not more weighted, from the supply side, which we will focus more on, in this month’s Monthly Insight.

The “hope” stems from a recent Bloomberg chart showing that commodities, a major contributor to elevated CPI, recently made a U-Turn and headed back toward early March levels: 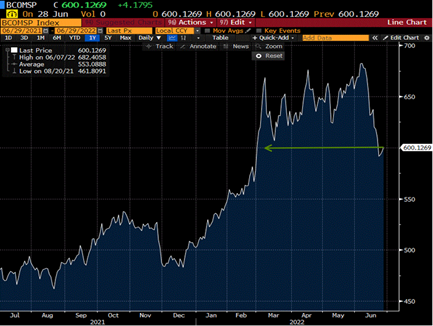 Let us look at some arguments here that pertain to why it is indeed peaking. Focusing first on the major component in CPI, Energy and Agriculture.

Crude oil hit an intraday high of WTI$130.50 and Brent$139 a barrel during the first few weeks of the war in Ukraine.

This spike has since plateaued albeit at a higher equilibrium/pivot level circa WTI$110 and Brent$115 a barrel.

The Biden administration has since proposed to tax or limit oil producers’ profits, something seen as quite extraordinary, whilst in Europe the lowering of crude tax is helping limit prices at local stations. Is that enough?

With OPEC agreeing to increase their oil output to 648,000 barrels per day ~ a 50% increase, the outcome of which remains insufficiently short as it needs to supply more, a lot more, to allow for greater sanctions on Russian oil.

On the flip side, with India and China’s purported direct-purchases of discounted oil from sanctioned Russia via backdoors, upside pressure on crude may be contained, especially if nothing is or can be done about this.

The price agreed bilaterally is an off-market reference price less a “mate’s discount” independent of where Brent or WTI trades.

Imports of Russian oil to China have risen 55% over the past year and in India, Russian oil imports now account for 10% of its total crude imports basket, from just 0.2% previously.

However, fertilizer prices after soaring to record levels, are finally starting to ease. They have retracted some 50% from recent highs.

The cheaper input costs in the production of agriculture will ensure the final produce sell for less going forward. Definitely welcoming news for those expecting a cooling of red hot inflation, should this pan out.

Too early to definitively judge but signs are pointing to a slowdown in demand-side pressures. Chair Powell mentioned that unemployment need to rise a little toward the 4.1-4.2 percent level in order to cool inflation further.

Is it a coincidence then, not even a month later jobs are cut at Snap, Tesla, etc.? Perhaps, perhaps not.

The street fears that a front loading of rate hikes by the Fed (150 bps so far) will lead excessively to a recession – which has happened time and time again in recent history. Powell is fully aware of this and is balancing between too much and enough, so as to cut should recession kicks in.

Unlike previous excesses, the current inflation is more supply-driven. We see any cooling in demand a direct consequence of recent Fed action (behind the curve or otherwise) and to this end – I grade them a Pass.

However, supply side improvement on the other hand would be a much needed bonus, in defeating inflation. The earlier part of this Insight point to some supply chain relief.

But for now, expect the Fed to continue front loading with a 50 bps or 75 bps hike likely in July.

Beyond that, it does really get “very challenging” to orchestrate a soft landing.

As far as longer term yields are concerned, the longer the yields remain little changed, the more likely at least theoretically, the economy will end up in recession, as near term rates are ramped up. Indeed, a slowdown if brought on too rapidly will result in a recession.

On the brighter side though, the street still expects earnings growth to remain resilient ie. on a positive trajectory – perhaps a soft landing is still achievable but with punctured landing tyres.…more likely.

Japan – finally, there’s sticky inflation, that’s good…. or is it?

It’s about being in a club OR be punished otherwise!

Japan remains one of the only DM economies to not have raised rates nor talked about talking up rates, guidance wise. Japan is NOT (perhaps yet) in the 25 or 50 or 75 basis-point club.

Instead, the BOJ has steadfastly defended its Yield Curve Control (YCC) policy effective since 2016, and the Yen has borned the collateral damage from it. No longer seen as the go-to safe haven currency it once was, the market is hell-bent on the BOJ giving up on YCC given Japan’s new-found inflation again. In the grand scheme of things, Japan’s 2.5% YoY inflation rate is a welcomed change which participants seem to somewhat forget. The BOJ battled for years to ensure higher inflation! Following decades of disinflation, the current inflation rate of 2.5% which is still below the 3.7% seen briefly during Abe’s 3-arrows policy back in 2014, is all but alarming for Japan. After all, the question one should be asking is why would they abandon YCC? Japan has yet to witness wage inflation. A weaker Yen boasts well for Japanese risk assets – the TOPIX and Nikkei 225 are both down “only” 5% and 7% respectively in Yen terms. Hardly a stressed environment for Japan.

Japan truly has the tools and the incentive to continue with YCC, we think.