“Any kind of crisis can be good. It wakes you up.” Ryan Reynolds

Geopolitical issues, Covid shocks, big tech regulatory reset and a crisis that is unfolding in the property sector in China has inflicted a 14-month drawdown on Chinese equity from February 2021. MSCI China index registered a drawdown of close to 54%, with forward P/E ratio peaking at 19.25 last year before tumbling down to the lowest point of 8.6 in March 2022. Since the trough, MSCI China index recovered 12% as of end July, with forward P/E ratio close to 10.00. Most investment banks have now turned more constructive on China Equities, opining that the worst is likely over. If one considered all the major China market correction (Exhibit 1) in the past 25 years, it does look likely that we have seen the worst. This month’s insight will focus on the macroeconomic of China and its current risk, with an emphasis on the latest Politburo meeting which took place in July and its impact. 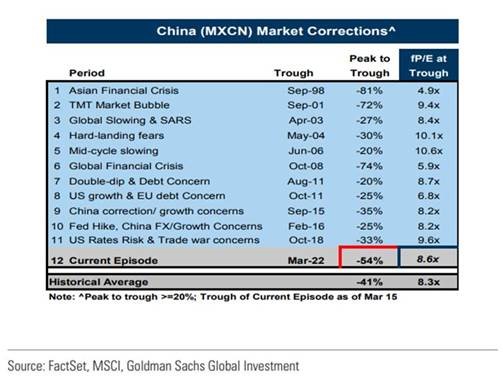 The latest Politburo Meeting (Exhibit 2) has seen China downplaying its 5.5% annual GDP target, by stating that growth should be maintained at a reasonable range and provinces with capacity should strive to achieve economic targets. Real GDP growth in 2nd quarter came in at 0.4 percent year on year, and we continued to see subpar recovery. However, most China analysts have already regarded China’s growth target as being unachievable, given its zero Covid policy. In addition, China has capacity in its monetary and fiscal policy to support its economy. Inflation in China is not an issue, given that its latest inflation number early July registered at 2.5 percent year on year. This is relatively low compared to US and Europe inflation numbers between 8 to 9 percent year on year. In terms of fiscal stimulus, China has stepped up its fiscal policy response. However, compared to year 2020, where Covid first started, it is still modest (Exhibit 3). Hence, we should see China growth gradually recovering in second half of 2022 on policy easing and Covid normalization. 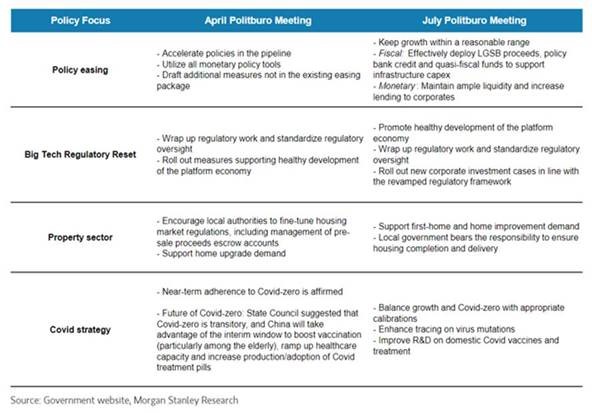 With regards to the regulatory scrutiny on Big Tech, China has pledged to wrap up regulatory work and standardize regulatory oversight on platform economy, and roll out a batch of corporate investment cases in line with the revamped regulatory framework. Positive signs have been accumulating in that area, and this can be seen by the latest development on further gaming license approval in July and reported news on cyber-security inspections concluding for Didi Global Inc. This implies that big-tech regulations have entered a stable phase. Valuation on China bid tech companies are now at an attractive level, with companies such as Alibaba and Tencent having seen their forward PE ratio derated more than half from its highest.

One key risk for China is its Zero Covid policy, which has seen China reiterating its stance on several occasions this year. That being said, we have seen continued and incremental calibrations on its Zero Covid policy. In June this year, it was announced that mandatory centralized quarantine time for inbound travelers was shortened to 7 days from 14 days. This is the first-time quarantine has been reduced since the outbreak of the Covid pandemic at the beginning of 2020. In addition, it is widely believed that we will see China further easing its Zero Covid policy after the Party Congress in October.

China’s property sector is posing the biggest macro risk, as housing contribution to GDP represents roughly 20 percent (direct and indirect). Housing market weakness has intensified in first half of the year with the collapse in housing activity such as new home sales, new home starts and land sales. In addition, following the first ever default of an onshore developer corporate bond, a growing number of homebuyers are reportedly refusing to make mortgage payments, as construction of their pre-bought housing units is facing extended suspension, due to liquidity stress among developers. With the above negative news being mentioned, there has been reports mentioning that PBOC may engineer a fund of up to 300bn yuan to bail out the sector. Earlier this year, China’s central bank announced that bank loans to fund low-cost rental projects will no longer be subject to regulatory curbs, which required banks to trim their loan exposure to the property sector to a certain level. Moreover, banks were also urged to speed up mortgage approvals. More lower-tier cities have relaxed curbs on housing purchases and lowered the threshold for down payments. Typically, housing policy takes 6-9 months to have the full impact. In any case, we believe that systemic failure to China property sector will be avoided, but the process of rectifying it will take years since the slowdown in private housing is structural.

Apart from the above risks, potential US market delisting for the Chinese ADRs posed another risk. Unfortunately, no further clarity is in sight, particularly with CSRC’s denial that a tiered solution is being worked on, and recent SEC Chair Gary Gensler’s comment that US and China need to reach an agreement “very soon” over audit work paper access to avoid delisting. Meanwhile, external concerns, such as quantitative tightening in the US overlapped with a gloomier global outlook and extended geopolitical tension, could also curb near-term re-rating opportunity.

In our view, the coast is far from entirely clear for Chinese equity rally case. However, gradual activity normalization amid easing Covid-related restrictions and the ongoing accommodation across key policy cohorts might stage a noticeable macro growth recovery in 3Q. In addition, China equity usually performs well in the second half of the year and in the run-up to the Party Congress. Light positioning by global investors remains an upside risk to near term returns as well. From a risk reward point of view, our view is that sectors such as Internet (Big Tech) and material (Green Economy) look attractive. Another potential theme to look at would be reopening beneficiaries due to further calibration of Covid restriction.