Global inflation concerns have stayed longer than expected. Even the fed who was calling inflation “transitionary” has moved to a more aggressive tightening policy after stubborn top line and core numbers refused to budge. This is not just in the US, but in several countries across the world.

Central banks around the world have responded to rising inflation by increasing interest rates. Governments have also responded with policies to help the population cope with rising costs. Yet, even with all that is being done, inflation remains a key concern around the globe.

What was thought of as temporary supply disruptions and reopening led price pressures, has become rather sticky even as the world has somewhat returned to “pre-covid” openness in economies and between countries. An exception being China which is still having on-going lock downs due to its covid-zero policy. Put aside these above listed factors as the culprit for inflation, could there be a larger trend at play that is causing inflation to be as sticky as it is?

The world population has aged rapidly over the past half-century. In the last 50 years, the old-age dependency ratio, defined as the share of individuals above 65 years old to the share of the working population (15 to 64 years old), has significantly increased. 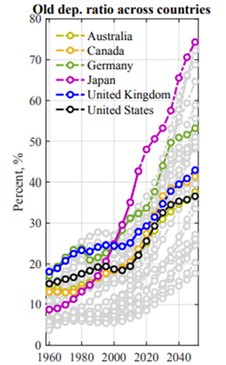 The proposition is that a demographic reversal coupled with the retreat from globalization is bringing back stronger inflationary pressures that could stay with us longer.  The aging baby boomers are commonly branded as the number one culprit for this situation. In the U.S., they will all be over 65 by 2030. In Europe, the ratio of young to old is expected to be 1:2 in 2060 (in comparison to 3:1 in 1960).

Demography will seal the fate of Western societies first because an aging population means falling productivity and higher fiscal costs. As the public debt burden reaches a crescendo, age-related healthcare and pension expenditures could quickly become unsustainable. In one case or another, this will weigh heavily on economic growth.

Over the past 40 years China was the main deflator of the world. It produced and inundated global markets with cheap goods. Favorable demographics provided the country with a huge and rapidly growing labor force willing to work hard for low wages. China’s inclusion in the world’s production and trading networks ended up affecting labor markets in advanced economies as well. In the years leading up to hyper-globalization, Western companies were eager to offshore their production to Asia in order to profit from these areas’ low labor costs.

The question of why inflation is bouncing back now can be answered in part by the reversal in China’s demographics. The size of the working age Chinese population has started to shrink, and this trend will intensify in the years ahead. At the same time, the ranks of the elderly keep swelling. No other nation in the world is aging at the speed and scale of China. Demographers predict the world’s most populous country will start to shrink in 2022, a turning point with profound ramifications for its future. A recent Financial Times article highlighted that  population in China is expected to fall below 800mn by 2100.

Demographic shifts, such as the aging of populations in the Western world, and now also in China, will revive inflationary pressures in the decades to come. These demographic trends will place increasing pressures on public policies, fiscal and monetary. An ageing society will require greater medical and pension expenditure, just as a declining workforce is slowing output growth, and hence taxable capacity.

This great demographic reversal will lead to a return of inflation, higher nominal interest rates, lessening inequality and higher productivity, but worsening fiscal problems, as medical, care and pension expenditures all increase in our ageing societies.

This may mean, sticky inflation – higher for longer.