Statistics released in the US proved disappointing. Prices have been rising much faster than had been expected (+1% MoM; +8.6% YoY), with the peak in the annual rate of inflation now likely to come further down the road. This state of affairs is denting consumer confidence, as borne out by the Univ. of Michigan barometer which fell from 58.4 to 50.2 in June. Likewise, mortgage loan applications have dropped by over 20% YoY. In the eurozone, Q1 GDP was upgraded slightly (to +0.6% QoQ and +5.4% YoY). In China, the services PMI bounced back from 36.2 to 41.4 in May, but not as high as hoped. Momentum in exports (+16.9% YoY) and imports (+4.1% YoY) surprised to the good, as did the pace of money supply growth in May (M0: +13.5% YoY).

The European Parliament voted to end the sale of new petrol, diesel and hybrid cars by 2035. The EU has thus followed the lead set by Norway, due to impose the ban from 2025, and the UK, Sweden, Ireland, Denmark and the Netherlands (from 2030). Conversely, reforms to the carbon market, aimed at abolishing CO2 pollution credits for industries that are the biggest carbon emitters, to be replaced by a carbon tax imposed at EU borders, was not approved.

It turned out to be a ‘risk off’ week on the markets. Poor US inflation numbers and the ECB’s sea-change in policy pushed 10-year sovereign bond yields upwards (US: +22 bps; EUR: +24 bps; CHF: +14 bps), sent equities downwards (US: -5.1%; Europe: -4%: EM: 0.6%) and caused credit risk spreads to stretch. Widening spreads on European peripheral bonds have penalised the euro, but worked to the dollar’s advantage (dollar index: +2%). Gold has been holding steady, while oil prices (+1.8%) continued to climb. To be monitored this week: SME confidence (NFIB index), confidence among homebuilders (NAHB), retail sales, housing starts, Fed meeting and industrial production in the US; ZEW confidence index and industrial production in the eurozone; and industrial production, retail sales and investment in China.

ACCOR (Satellites): RevPAR numbers reportedly surged by 243% in France (30% of sales; 25% of group EBIT) in May despite a challenging base effect (May 2021: +412%). The dismantling of restrictions, the strong recovery in travel/tourism and a robust economy have played their full part in this, with the months ahead looking promising.
APPLE (Core Holdings) last week held its WWDC event with the unveiling of the iOS 16, iPadOS 16, macOS 13 Ventura, watchOS 9 and the new M2 chip. Apple will also be joining the “buy now, pay later” arena as from this autumn. This will enable its US customers to pay for purchases online and in-app, with payment instalments being staggered over six weeks (with zero interest or fees). There were no news updates on the virtual reality headsets or augmented reality (likely to come in 2023).
DSM (added to Satellite Recommendations): after announcing the divestment of its Materials businesses and its merger with Firmenich, DSM has finalised its process of refocusing on ingredients. Its growth profile will be among the most attractive in the sector and is set to be boosted by synergies of €350m being generated, to deliver projected sales growth of 5-7% and an EBITDA margin climbing towards 22-23% by 2026.
ING (Satellites) announced its financial targets for 2022-2025 during its Investor Update. With 3% annualised growth, a cost/income ratio of 50-52%, an RoE of 12% and a CET1 ratio of 12.5%, the outlook may not differ all that much from current consensus estimates, but the targets still look very robust.

The week in the US was influenced by May inflation numbers coming in well above expectations (1% MoM vs. an expected 0.7%). Yields reacted smartly (2-year yields up 41 bps; 10-year yields up 22 bps). The market is now expecting the Fed to hike rates by half a point at each of its next three meetings. The ECB confirmed its intention to tighten monetary screws from July. Spreads on peripheral bonds widened considerably (10-year Italian yields up 36 bps), with investors wanting more detail as to how fragmentation risk might be contained. 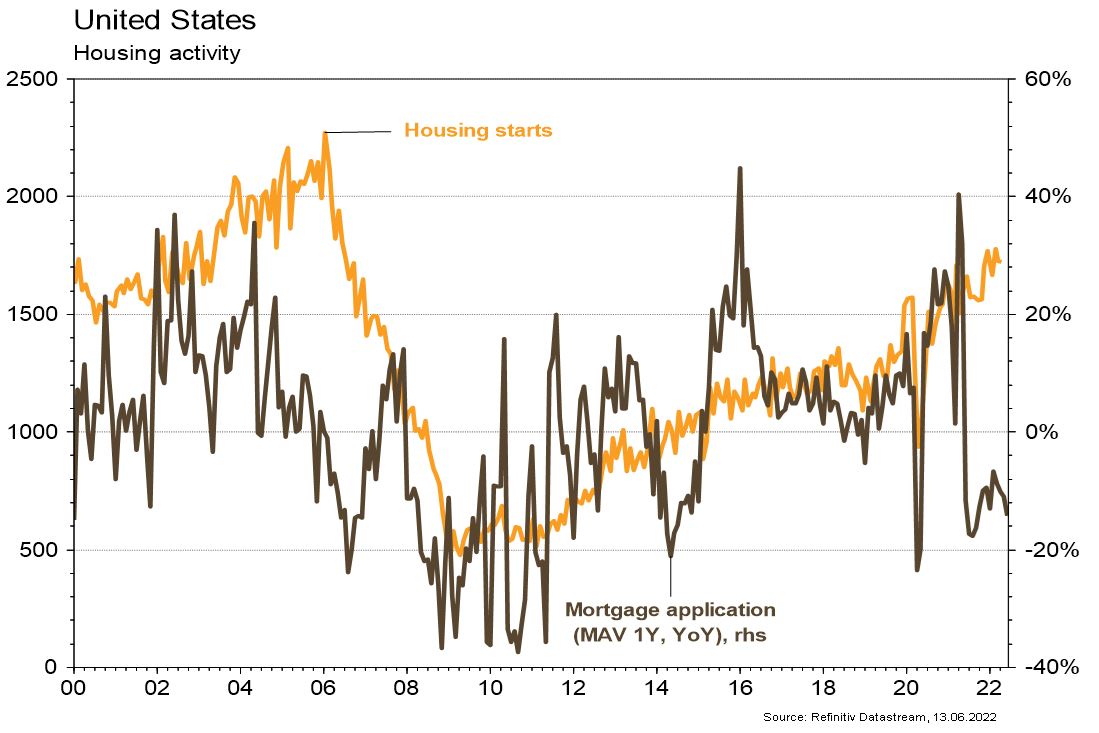 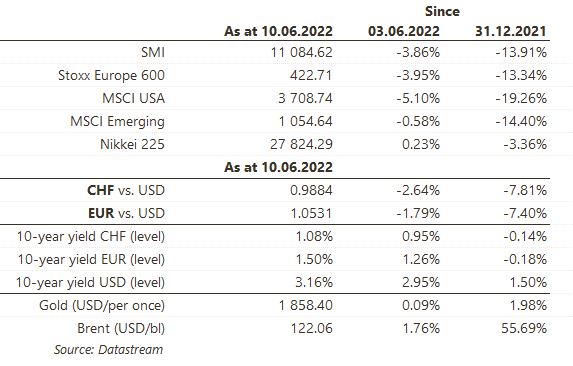 This document has been issued for information purposes and is exclusively supplied by Bordier & Cie SCmA in the framework of an existing contractual relationship with the recipient of this document. The views and opinions contained in it are those of Bordier & Cie SCmA. Its contents may not be reproduced or redistributed by unauthorized persons. The user will be held liable for any unauthorized reproduction or circulation of this document, which may give rise to legal proceedings. All the information contained in it is provided for information only and should in no way be taken as investment, legal or tax advice provided to third parties. Furthermore, it is emphasized that the provisions of our legal information page are fully applicable to this document and namely provisions concerning the restrictions arising from different national laws and regulations. Consequently, Bordier Bank does namely not provide any investment services or advice to “US persons” as defined by the Securities and Exchange Commission rules. Furthermore, the information on our website – including the present document – is by no mean directed to such persons or entities.