“A New Variant of FAANG”

The first quarter of 2022 has seen extreme market volatility amidst major changes geopolitics, monetary policy and growth outlook. The invasion of Russia on Ukraine has caused global stagflation worries (high inflation and low growth). Global central banks have engaged in hawkish monetary policy, to tackle high inflation. The Fed in particular has communicated that they would start quantitative tightening, and hike rates expeditiously. As a result, both the global bond and equity market have seen negative performance this year.

FAANG has served investors well, by driving consistent gains in the stock market for the past ten years. FAANG is an acronym referring to the stocks of the five most popular and best-performing American technology companies: Meta (formerly known as facebook), Amazon, Apple, Netflix and Alphabet (formerly known as Google). Their historical performance in the past ten years has been stellar with Meta (+651.22%), Amazon (+1,431.14%), Apple (+746.26%), Netflix (+4,033.24%) and Google (+856.74%). However, the performance for FAANG this year has been in dismay, with all these five stocks registering negative performance.

In the wake of Russia invasion, a new variant of FAANG has now emerged and surged in value. This new variant represents F: Fuel, A: Agriculture, A: Aerospace and Defense, N: Nuclear and lastly G: Gold. This new FAANG also represent five different themes that benefited from Russia invasion of Ukraine, resulting in sanctions that have sent commodity prices surging and the world scrambling to wean itself from Russian supplies. As of 31st March, we are into day 35 when Russia first invade Ukraine, with no resolution in sight. It looks likely that the invasion may drag on for months, and even if a resolution has been reached, the sanctions placed on Russia look likely to remain. We will discuss further in the below section on each theme, how they have benefited from the war, and the different investment instruments applicable.

Following the invasion, US has declared a complete ban on Russian oil, gas and coal imports. UK has announced that they will phase out Russian oil by the end of the year, and Europe is reducing its Russian gas imports by two thirds in 2022. Russia is the third biggest producer of oil in the world, behind the US and Saudi Arabia. OPEC, the oil cartel which accounts for roughly 60% of the crude oil traded internationally, has maintained their current pace of raising supply, disregarding the situation in Eastern Europe. These factors, coupled with a fall in demand of oil in China due to worsening Covid situation, have caused oil prices to spike up significantly, with WTI and Brent up 35.62% and 38.74% respectively as of 31st March. Russian gas accounts for about 40% of Europe natural gas imports. There are a few available instruments to invest in oil (i.e Ipath Pure Beta Crude Oil (OIL US), WisdomTree WTI Crude Oil (CRUD LN)). As for the investment in Natural gas, Bordier is looking to launch an Actively Managed Certificate investing in Natural Gas and LNG in Mid-April. This certificate will invest in the performance of a selection of 18 Natural gas and LNH leaders rebalanced frequently. 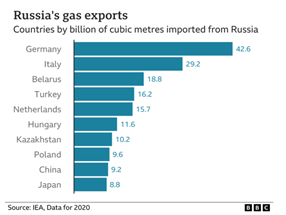 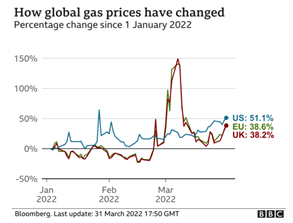 A crucial portion of the world’s wheat, corn and barley is trapped in Russia and Ukraine because of the war. Combined Russia and Ukraine’s wheat exports account for close to one third of the world supply. Apart from this, Russia is the world’s largest fertilizer exporter, providing about 15 percent of the world supply. Sanctions also have hit Russia’s closest ally, Belarus, a leading producer of potash-based fertilizer, critical for many major crops including soybeans and corn. Brazil, the world’s largest producer of soybeans, purchases nearly half its potash fertilizer from Russia and Belarus. The result of all these is that global food and fertilizer prices are soaring. The upheaval is compounded by major challenges that were already increasing prices and squeezing supplies, including the pandemic, shipping constraints, high energy costs and recent droughts, floods and fires. One ETF which we can invest in is the Ishares MSCI Global Agriculture (VEGI US). In Bordier, we have launched and are invested in Actively Managed Certificate investing in Agritech players. This AMC offers a full participation in the performance of a selection of 22 Agritech players rebalanced frequently, regionally diversified (US, Canada, France, UK, Japan etc) and exposed to different segments (seeds, fertilizers, spraying, irrigation, harvesting tech, cultivation & processing, field monitoring, hydroponics, retail, animal health).

The invasion of Russia on Ukraine has spurred military spending. According to a report by Allied Market Research, the global market for nuclear missiles and bombs should surpass $126 billion within ten years, up nearly 73% from 2020 levels. In the US, President Joe Biden’s record peacetime national defense budget request of $813 billion boasts a 4.6% pay raise for troops and the largest research and development budget in history. Biden’s request earmarks $773 billion for the Pentagon, and eclipses the budget requests by former President Donald Trump. An additional USD 40 billion is earmarked for defense-related programs at the Federal Bureau of Investigation, Department of Energy and other agencies, bringing the national security budget to USD 813 billion, up from USD 778 billion last year. One ETF which we can invest in is the Ishares US Aerospace & Defense ETF (ITA US).

The sanction on Russian oil and gas has turned the focus back to Nuclear energy, which is considered the most reliable energy source and it is green as well. Nuclear is a zero-emission clean energy source, as it generates power through fission, which is the process of splitting uranium atoms to produce energy. Nuclear energy has by far the highest capacity factor of any other energy source. This basically means nuclear power plants are producing maximum power more than 93% of the time during the year. That is about 1.5 to 2 times more as natural gas and coal units, and 2.5 to 3.5 times more reliable than wind and solar plants. Investment instruments in Nuclear energy include Sprott Physical Uranium Trust (SRUUF US), Global X Uranium ETF (URA US) and Northshore Global Uranium Mining ETF (URNM US). Sprott invest directly in uranium, as it holds substantially all its assets in uranium, while both URA US and URNM US invest in companies focusing on mining, exploration etc.

Gold, traditionally a safe haven asset, has benefitted from the Russia-Ukraine invasion. Investors have been buying Gold as a hedge for their portfolio risk. Investors, who are looking to invest in gold, typically have three alternative – 1) to buy physical gold, 2) to buy paper gold and 3) to buy shares of a mutual or exchange traded fund that replicates the price of gold. One such example of a mutual fund is SPDR Gold Shares (GLD US). The term ‘paper gold’ refers to an asset that reflects the value of gold, so it is considered to be ‘on paper’ and the investor doesn’t keep the physical gold itself. For clients looking to purchase physical gold, Bordier offers custody for both physical gold bars and gold coins. Clients can decide on the location to keep these physical golds in either Singapore or Switzerland, or even to collect and hold these golds themselves.