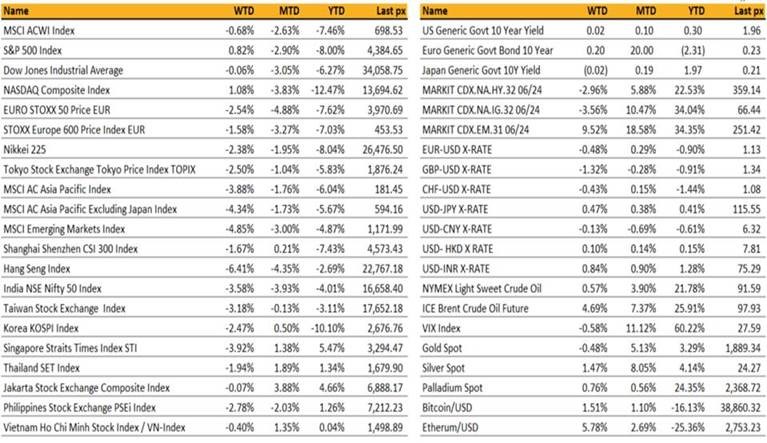 The shortened week was dominated by news of Russia invading Ukraine which sent shockwaves in global markets. After violent swings, the US ended the week flat to slightly higher after news came out of Russia that Putin was open for talks with Ukraine. Delegates from both sides will meet at the Belarus-Ukraine border today. China’s President Xi held a phone call late afternoon Friday with Putin urging him to negotiate with Ukraine to defuse tensions.

Hopes of a less aggressive Fed amid the crisis also helped with sentiment. The general consensus was that geopolitical developments made a 50 bps hike next month unlikely. Headwinds of higher inflation and the loop-effect of sanctions on Russia could see recent gains capped.

As Asia opened this morning, US futures traded down some 2% setting the tone for further volatility after western nations unveiled harsher sanctions on Russia. Selected Russian banks have been blocked from SWIFT and ‘restrictive measures’ been imposed on the Russian Central Bank. Gold which hit a 17-month intraday high last week is at $1911 after trading briefly above $1974 an oz. Brent topped $105 a barrel before retreating whilst WTI touched a high of 100.5 a barrel.UST10Y yield traded a low of 1.844% before closing back at 1.92%

Friday showed the Fed’s preferred gauge of inflation (PCE) jumping to 6.1% which was higher than expected and the most since 1982. The Fed must now strike a delicate balance to reassure Americans the Fed will confront high inflation at the same time the war in Ukraine clouds its economic outlook. Other data including personal income and spending which topped estimates, also provided a lift to sentiment. Annualised GDP QoQ came in at a firm 7% as expected.

There was a broad rally in all of the 11 major industry groups Friday, and given the Fed’s continued stance on fighting inflation, we think that financials would sustain the recovery, followed by materials as demand builds up. Cryptos recovered off its lows as risk-on sentiment returned with BTC rebounding from $35k and ETH from $2300 lows.

This week will see ISM manufacturing and PMI data together with unemployment, at the latter part of the week. Non-farm payrolls is expected at 400k with the unemployment rate set to improve to 3.9%.

The biggest development this week was the escalation of the Ukraine crisis to an outright war. European markets ended lower by 1.58% in volatile trade but saw a sharp rebound on Friday with the STOXX Europe 600 ending up 3.3% after economic sanctions imposed by Western allies did not hit key energy supplies and include a SWIFT exclusion. Russia’s MOEX and RTS closed up 20% and 26% respectively on Friday and European gas prices fell more than 30% after sanctions imposed by the west included a carve-out for energy payments to Russia.

However, in a joint statement on Saturday, the US, the UK, Canada, France, Germany, Italy and the European Commission said they would prevent the Russian central bank from using its international reserves and would remove some of the country’s lenders from the SWIFT global financial messaging system. Long queues of people were seen forming in Russian cities to withdraw rubles and dollars amid fears of a collapse of the national currency. Russia’s central bank pledged to supply banks with unlimited ruble liquidity, expand securities it will accept as refinancing collateral, and resume buying gold on the domestic market from Monday. It was also reported that it ordered market participants to reject bids by foreign clients to sell Russian securities. The fallout may extend globally as excluding Russian banks from SWIFT may lead to missed payments and huge overdrafts. As a result, central banks may need to be ready to make markets from Monday, with Fed prepared to supply dollars.

Putin put Russia’s nuclear forces on high alert in retaliation, putting additional pressure on the Ukrainian delegation to the peace talks. In Germany, Olaf Scholz unveiled plans to invest massively in the country’s armed forces and spend more than 2% of gross domestic product on the military.

Banks were the worst performing sector amid volatility in rates, some repricing in the rate outlook and concerns over exposure to Russia. Banks with the biggest exposure to Russia and Ukraine saw the worst performance. The biggest impact on banks came from dampening in ECB rate hike expectations, which had been one of the key drivers of the sector rally, but there are also concerns that the current situation might increase the cost of equity for banks and that the downward pressure on the Eurozone growth outlook might affect EPS growth.

Utilities, basic resources and energy outperformed as the Ukraine situation underpinned the uptrend in in the commodities. Russia and Belarus are major producers of potash, a crucial input for fertilizers. In addition, Russia and Ukraine supply 21% of the world’s wheat, barley, and maize. The postponed commissioning of the Nord Stream 2 gas pipeline will extend the duration of the energy price spike and could fuel a debate on EU energy market strategy. In terms of the macroeconomic implications, the situation is expected to worsen the squeeze on European consumers via higher energy, heating, gas, and food prices and has increased the probably of a stagflation scenario.

In terms of macro outlook, the longer this conflict drags on, the greater the impact on the European economy. As consumer and business confidence decline, European recession risks will increase and could delay the onset of interest rate normalization at the ECB. ECB comments already suggest that the push towards policy normalization will happen at a slower pace than previously forecast. Goldman Sachs cut its outlook for the STOXX 600 to 490 from 530 given the worsening growth/inflation mix.

Bank of Korea (BoK) kept the policy rate unchanged at 1.25%, in line with consensus expectations. The rates decision was unanimous as the BoK paused raising the policy rate to access the effect of the previous three hikes. Regarding inflation, BoK forecasted CPI will run substantially above 3% for a considerable time, exceeding the path projected in November, and run in the low 3% level for the year overall.

In Indonesia, the finance minister commented that consumer confidence was not hurt by the spread of Omicron, and the government expects 2022 GDP growth of 4.8%-5.5%.

In China, there has been some city-level relaxation in the property sector. According to media reports, the PBOC has urged commercial banks in Shanghai to accelerate growth in both mortgages and developer loans over the next few months. Meanwhile, Chongqing and Guangzhou banks have begun to cut mortgage rates for some home buyers.

DXY USD index rose 0.60% to close the week at 96.615 after hitting a high of 97.735 intra-week due to the further escalation of geopolitical tensions between Russia and Ukraine. Data wise, most US data last week were slightly better than expected. US PMI for Feb prelim. all outperform expectation with manufacturing at 57.5, services at 56.7 and composite at 56.0. GDP for 4Q came in at 7% as expected. Core PCE QoQ came in at 5.0%, slightly better than consensus at 4.9%. Trading range on a weekly basis remain intact between 94.0 and 97.5.

European G10 Currencies fell against USD, as the demilitarization of Ukraine by Russia impacted more in Europe. EUR, GBP, SEK and CHF fell 0.48%, 1.32%, 0.06% and 0.40% against USD respectively. GBP was the worst performing against USD, being a risk sensitive currency, despite UK PM Johnson announced the end of Covid restrictions in England, and its PMI outperforming consensus. This was probably due to its heavy GBP long positioning.

NZD rose 0.69% against USD to close the week at 0.6743, as RBNZ delivered a 25bp hike as expected, preserved optionality for a 50bp hike in the future, and formally announced QT with asset sales beginning in July. The policy meeting was hawkish, as the central bank also raised its terminal rate projection meaningfully above neutral to 3.25%. Data wise, retail sales rose 8.6%, a big beat against consensus.

Commodity markets were bolstered on the possibility of further supply-side constraints due to Russia-Ukraine event. US President Biden also announced the expanded sanctions would include Russia’s Nord Stream 2 gas pipeline. WTI and Brent hit a high of 100.54 and 105.79 intra-week before retracing to close the week at 91.59 and 97.93. WTI and Brent was up 1.53% and 4.69% for the week. Aluminium and Iron Ore was up 2.65% and 1.78% last week.