The week that was ended little changed overall with only the Nasdaq Composite taking the brunt of the fall at -1.5%. The tug of war between the (healthy) strength of Corporate America and recent Fed Reserve comments about plans to raise rates and there for longer kept ranges tight. St Louis Fed President Bullard said interest rates needed to rise at least to 5% – 5.25% to curb inflation, Waller said recent data made him more comfortable with a moderate rate rise of 50 bps next month, the latest blows to investors hoping for a Fed pivot. NY Fed President Williams dented investor sentiment further when he said the Fed should avoid incorporating financial stability risks into its considerations as it hikes rates! Most analysts agree that rates will be hiked going into 2023, but are at odds over how high they will go and whether cuts will come into play by the end of 2023: 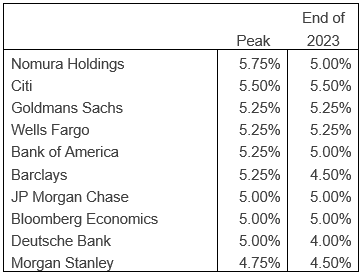 Another factor that had kept bears on the sidelines has been the Powell chart, where the 3 month Treasury yield is plotted against the 18 month forward swap rate for 3 months. Powell preferred this chart as an indicator of possible recessions, which has been inverted for the most part of last week. In spite of all the hawkish rhetoric, the Fed is expected to downshift when it next meets on the 13th of December.

Economic data remain mixed with manufacturing data (Philly Fed Index) falling to 2-year lows whilst claims fell less than expected underpinning the strength of the labour market. Retail sales rose a stronger than expected 1.3% in October which seems a little too resilient and prone to more fed hikes. US PPI for final demand on the other hand, advanced 8% in October from a year earlier, 0.2% from a month earlier – smallest gain in more than a year. Crypto exposed stocks slumped following FTX’s bankruptcy filing, with some exchanges (Gemini) reporting redemption suspensions.

The US 10-year Treasury yield fell some 10 bps to 3.82% for the week, after recovering from a low of 3.67% on Thursday. The 2yr-10yr inversion widened to 70 bps, a more than 40-year record. The base case from Bloomberg Economics suggests that US Treasuries could be poised to continue rallying IF the market continues to price a 2023 recession.

This week is a shortened one with Thanksgiving on Thursday. Durable goods, PMI for manufacturing and services, U. of Michigan inflation expectations as well as the last FOMC minutes will be key data releases for the week.

Both Biden and Kamala had been busy travelling to Asia for the G20 and Thailand APEC summits during the week – the good news being communication is being restored between the 2 largest economies in the world.

Missiles may have struck Poland and killed two near its border with Ukraine. Polish national security officials held an emergency meeting and NATO allies are investigating the source of the blasts. Meanwhile, Russia launched a fresh round of attacks on Ukraine causing blackouts in several cities and neighboring Moldova. Preliminary analysis suggests that the incident was likely caused by Ukrainian air defense missile fired to defend Ukrainian territory against Russian cruise missile attacks

Zelensky urges world leaders to back plan to end war in Ukraine, says more fighting needed to reclaim control of all of its occupied territory.

FBI says China has stolen more US data than every other nation combined.

China complains over support for Taiwan at COP27.

China industrial production slows and retail sales unexpectedly shrink. Retail sales fell by 0.5% in October, while industrial production grew by 5%,missing estimates. Ongoing travel restrictions to control Covid outbreaks weighed on tourism during a week-long public holiday last month. The unemployment rate in cities was unchanged from September, at 5.5% in October. That of young people ages 16 to 24 was also unchanged, at 17.9%.

Xi and Biden clash over Taiwan in meeting but Cold War fears cool. After three hours of talks in Bali, Biden said there need not be a new Cold War between the two powers and Xi told him that China was not challenging the international order. The White House said that Secretary of State Antony Blinken would visit China, the first visit by the top US diplomat in more than four years.

Australia’s prime minister Anthony Albanese pressed Chinese president Xi Jinping to lift punitive export sanctions at a meeting that he called an “important step” towards stabilizing ties between the major trading partners. But Xi offered no immediate easing of Beijing’s sanctions on products ranging from coal to beef and barley.

Thailand, a decree was published in the Royal Gazette reducing annual taxes on EVs with immediate effect. The purpose is to expand their use and reduce air pollution by invoking Section 175 of the constitution and Section 31 of the Vehicle Act 1979. It will lower the annual vehicle registration tax by 80% for new EVs registered within three years of the decree. The tax discount is offered to owners for the first year only.

WTI and Brent fell 9.98% and 8.72% to 80.08 and 87.62 respectively, due to concerns about weakening demand in China amid rising Covid cases and further increases to US interest rates. US prompt spread flipped into contango, a structure that signals oversupply, for the first time since last year. Meanwhile, a deteriorating market for physical barrels has also weighed on prices as demand for winter delivery cargo has weakened.

Disclaimer: The law allows us to give general advice or recommendations on the buying or selling of any investment product by various means (including the publication and dissemination to you, to other persons or to members of the public, of research papers and analytical reports). We do this strictly on the understanding that: